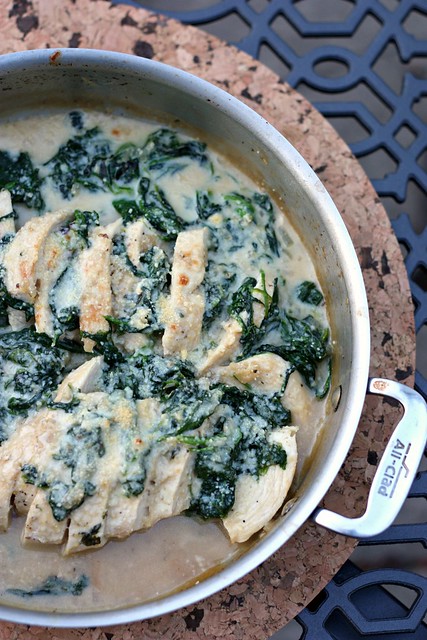 I eat the same thing (or a very close approximation) for breakfast, morning snack, and afternoon snack 5 times a week. It doesn’t bother me at all. I never get bored. But dinner? For some reason, I can’t make the same dinners frequently or have any sort of “rotation.” It’s a mixture of boredom and wanting to try so many things. Cookbooks, bookmarks, Pinterest, and Pocket things. Still, we eat a lot of chicken. Chicken breast will never be our favorite thing (to be sure, Zachary has a “favorite proteins” list he updates very frequently, but chicken has never topped the list), but it’s healthy, it’s fast, and it’s highly adaptable. So it gets made a lot. In many different forms.

This is a dish we’ve made a couple of times now and really enjoyed. It’s a lighter version of Florentine, using a mere 2 tablespoons of cream vs. a cup or so. But the sauce is still flavorful and luxurious, thanks to being reduced down, and a dose of lemon zest and juice. The chicken is perfectly cooked, the spinach done but not overdone.

I feel like pasta is the go-to accompaniment for chicken Florentine, but we had this with baked brown rice, which I thought was perfect. Plus, with the vegetables in the rice and the spinach in the chicken, there was no need to make a third dish/veggie side. Score!

You’re supposed to put the chicken into a baking dish, but I saw no need to get something else dirty, so I just continued to use the skillet I’d been using for the rest of the dish.  If you’re anything like me, you’ll want to replace the water in the dish with more broth, but don’t. The broth/water mixture reduces for a while, so it will get plenty salty on its own and doesn’t need that extra oomph of salt/flavor that I feel like a lot of ATK recipes could benefit from (and often take the initiative to change myself). I used a low-sodium broth (also recommended) and didn’t need to add any salt to the finished sauce.

Heat 2 teaspoons of the oil in a large skillet (preferably broiler-proof) over medium heat. Add the spinach, a handful at a time, and cook, stirring often, until wilted (about 5 minutes). Remove to a colander; press with a spatula to remove excess liquid. Wipe out the skillet.

Season the chicken with salt and pepper. Add the remaining 2 teaspoons of oil to the now-empty skillet ad heat until smoking. Brown chicken on both sides, 4-6 minutes total (chicken will not be cooked through); remove.

Add the shallot and garlic to the oil remaining int he skillet and cook until fragrant, about 30 seconds. Stir in the flour for an additional 30 seconds. Whisk in the broth and water, scraping up any browned bits. Add the browned chicken with any accumulated juices and bring to a simmer. Reduce heat to medium-low and cook until chicken is cooked through, about 10 minutes. Transfer the chicken to a cutting board and tent loosely with foil.

Meanwhile, continue to simmer the sauce until slightly thickened and reduced down to 3/4 cup, about 15 minutes. Off the heat, whisk in the cream, lemon zest, and juice. Season to taste with salt and pepper.

Slice the chicken crosswise into 1/2″ thick slices and arrange in a broiler-proof dish. Scatter the spinach over the top and then cover with sauce. Alternatively, you can use the same skillet, if broiler-proof, adding the spinach to the sauce, and then nestling the chicken inside, spooning the sauce over the top. Sprinkle with the Parmesan and broil until cheese is spotty brown, a couple of minutes.