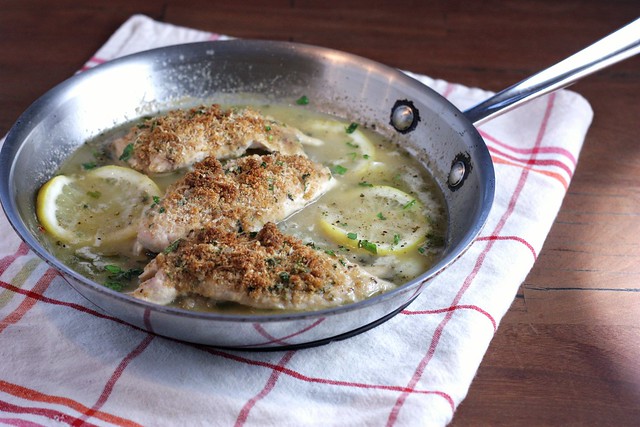 I have a new crush, and her name is Lidia Bastianich.

I’ve known about Lidia for a while. I’ve made a bunch of her recipes, though I’ve somehow only managed to blog one. They’re always great. Always. You look at the ingredient list and nothing jumps out at you and says, “this super terrific and rarely-used ingredient will make your meal shine!” Instead, it’s just simple, normal ingredients. And she somehow manages to make them so harmonious and delightful.

We’ve had this meal at least 3 or 4 times. Every time, I ask myself why I’m making it on a Saturday because it’s so quick and easy (those types of meals tend to be reserved for weeknights). It just…I don’t know, seems like a weekend meal? The last time I made this (the photographs in this post), I didn’t even bother pounding and rolling chicken breasts. Tom had accidentally bought tenderloins, so I basically just sandwiched the breadcrumb filling between two, which made the meal even quicker, albeit not as pretty. There is no searing of the chicken before baking it, which is a good thing because me + stuffed/rolled chicken + browning =  a disaster for me (chicken falling apart in the pan as I try to flip it and all that). I’m normally against 100% baked chicken, but it works well in this case (thanks to the breadcrumbs, no doubt).

We’ve had this with baked brown rice pilaf and pasta, but I think my favorite non-vegetable side has been mashed cannellini beans. Once, I assumed parmesan cheese went into the breadcrumb mixture and only realized too late it did not. But cheese is never a bad thing, so clearly that adaptation was juuuust fine and I’m including it as an option below. 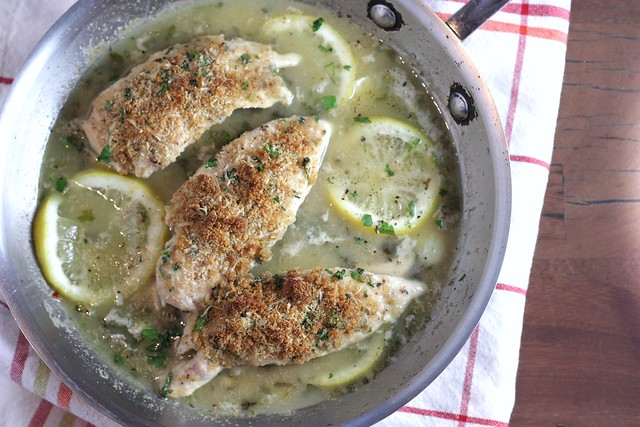 4 thoughts on “Chicken in Lemon-Herb Sauce”