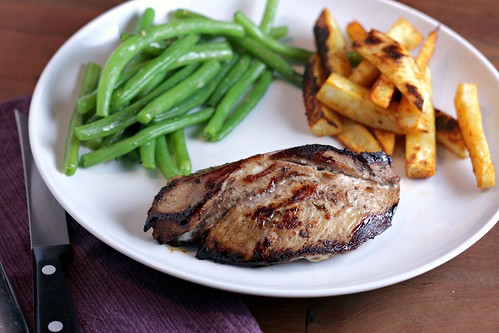 My youngest has taken after his older brother and become food-obsessed. The upside is my kids are not picky. The downside is I’m not sure how we’ll afford to feed these children without taking out a second mortgage on our house in a few years. Ian wants to watch me make dinner but, weirdly, has zero interest in helping. If he had his way I would hold him with one arm while trying to chop and stir with another. It’s not my favorite stage. He’s always in the kitchen asking, “What for dinner mom? Can I see? WANT TO SEE. Chicken in oven? Whassat? Bread? We have pasta? WANT PASTAAAAAAAAAA!!!!!” My husband tries to keep him occupied but it’s sometimes futile and he has stuff to do, too.

When you have a near-2-year old clinging to your leg and whining about food, the last thing you want is something that takes a long time to cook. This is one of the reasons I really like marinating food because I can just throw it in the pan when I get home. Roasting yams is hands-off after the first few minutes and I only cook green beans for 3ish minutes, so these types of meals are frequent in our house as of late.

We’ve had this marinade on chicken (breasts and thighs) and pork (chops and tenderloin), and I’m sure it would be good on steak too, if you’re not too much of a steak purist. It reminds me of a not-spicy jerk marinade, but of course if you want some heat you can add a minced habanero, more hot sauce, etc. to suit your tastes. Next time I plan on replacing the brown sugar with honey, which I’m sure will be equally delicious and eliminate refined sugar. Oh, and I’ve also made it without bothering to cook the onion (just chopping it finer), which works too. Laziness wins often around here.

The ingredient list for this is long, but likely contains ingredients you already have in your pantry. Plus, this makes a decent amount of marinade, so you could likely get 2-3 meals from it, depending on how many people you’re cooking for. I like to freeze extras in gallon-sized bags, so that when you’re ready to use it, you have enough room in the bag to place your meat.

Heat the oil in a skillet and add the onion. Cook until translucent and then stir in the garlic and cook for 30 seconds.* Transfer to a bowl. Add the remaining ingredients and let cool to room temperature. Pour the marinade over protein (works for about 2 lbs. of protein;  you can freeze unused marinade).

*Note: As indicated above, I’ve made this without bothering to saute the onion and garlic and just chopping them finely.