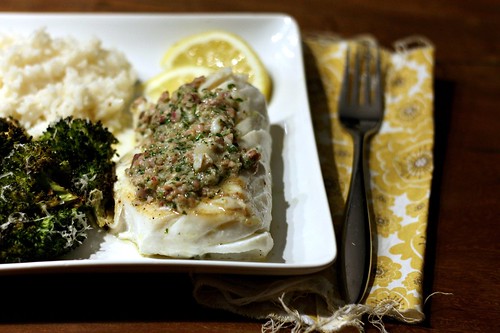 If you’re a long-time reader, you’re bound to have noticed the near absence of fish on this blog (or, maybe you’re happy about it). I’m just not much of a seafood person. Shrimp and I are cool, but everything else is just kind of…meh? To be clear, it’s not that I have a real dislike for most seafood, it’s that I don’t have a real like for it. When given protein options, I would choose anything else. Doing the math, I have just calculated that I average 1 fish post every 2 years (in which I complain about how I don’t really like fish. But  you know if they got posted, then they’re actually good and we’ve had them more than once).

My husband, though, loves fish (you’d think he was the Greek one). He asks me to make it occasionally and I usually just say, “no.” (I know, I’m great.) This week, though, I finally decided to agree to his request and went on the lookout for something I would like. A quick search came up with this recipe, which looked like a hit.  I’ve mentioned before that prosciutto makes basically anything better. As for lemon, garlic, and butter, those are just requirements.

The fish was indeed a hit. Now, I won’t say it’s my new favorite protein (Zachary, however, told us, “Fish is my third favorite protein. First is lamb chops, then meatloaf.”) but I did like it, which is saying a lot. Ian had been battling a stomach bug and this was the first full meal he ate and he did so in full—including asking me for some of my fish. Tom loved it but Tom would love anything with fish since he rarely eats it, so take that for what it’s worth. 🙂

Have I mentioned that I don’t really like broccoli, which we also  had with this meal, either? God, I was basically the best wife ever this night. To be fair, I do sort of like it now, but really only in one application, which is roasted with olive oil, lemon juice, a little crushed red pepper and sometimes garlic and/or parm. You could toss anything in those ingredients and I’m bound to like it (just kidding, cauliflower will never fall into the “like” category for me).

Heat an oven-proof skillet (I used nonstick) over medium heat, and add the oil. Once hot, add the fish to the pan. Cook for 4 minutes; flip and cook an additional minute. Spread a tablespoon of the butter mixture over each piece of fish. Place the skillet in the oven for 2 minutes, or until fish is cooked through and opaque. Place the remaining butter in the skillet to melt, and spoon as a sauce over the fish.

3 thoughts on “Roast Cod with Garlic (and Prosciutto!) Butter”