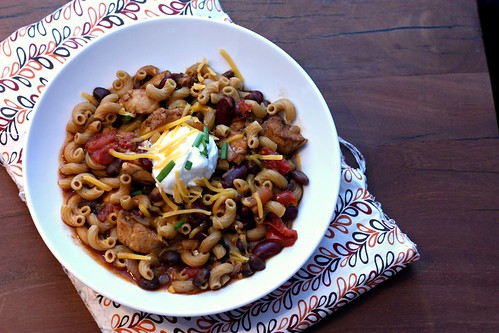 My older kid is usually pretty good about being gracious at dinnertime. Sure, we sometimes have those moments where he JUST DOESN’T WANT _____ or he is appalled at the audacity I had to mix his rice with the rest of the meal, but generally speaking he thanks me at the end for “making this yummy dinner.” Also, he has a pretty great lunch program at school, and he likes it a lot, but he often tells me that my food is better. He knows how to win me over.

The night we were supposed to have this meal, the commuter train was really late, which meant pick up and getting home was also really delayed. I had pretty much no time (or inclination, at that point) to cook. So we stopped by the grocery store and picked up a rotisserie chicken and some sides. Zachary told me it was “the best chicken [he’d] ever had” (fresh off the heels of him telling me the TJ’s boxed mac and cheese I made the week prior was “the best dinner ever”)…so maybe he doesn’t know how to win me over after all.

But, I know how to win him over and it’s with anything remotely Mexican. Beans? Yes (he has asked to take beans to school for breakfast, no joke). Sour cream? A food he would gladly just eat out of the container with a spoon. After he had this dinner, my place as “best cooker ever” was restored.

The only real changes I made to this recipe were to add paprika and reduced the amount of broth based on similar recipes (because I am no stranger to Hamburger Helper-ish meals), which worked well. As the title indicates, this is basically a one-pot version of chicken chili + macaroni. It’s hard to go wrong.

This meal is healthy – lean chicken, whole wheat pasta, protein-packed beans. It’s fast. It does not suck to clean up. Your kids will like it (but be warned: it may cause stains on your shirt from toddlers grabbing your arm to ask for more).

Adapted from The Comfort of Cooking via The Dainty Chef

In a bowl, toss together the chicken, onion, chili powder, garlic powder, cumin, paprika, and salt to taste. Heat a deep skillet (or Dutch oven) over medium-high heat and add the oil. Once  hot, stir in the chicken and onion mixture. Cook until chicken is browned and onion has started to soften (chicken will likely not be cooked through, which is fine). Stir in the garlic and tomato paste until fragrant, about 1 minute.

Add the diced tomatoes, chicken broth, and beans, and bring to a boil. Stir in the pasta. Cover partially and cook, stirring occasionally, until pasta is done, about 7 minutes-8 minutes. Serve with desired toppings.