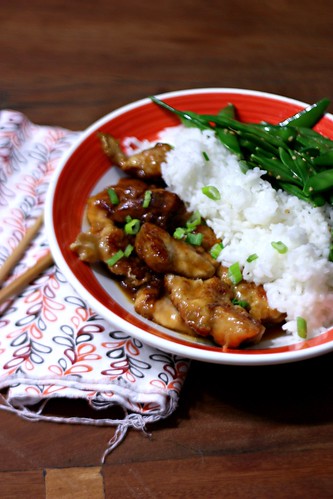 Oh, hi there. Did you think I had abandoned you? Well, I didn’t mean to. Things have been a little crazy around here lately and to top it off, my (only) lens broke. Every once in a while I can get it to work but then it will abruptly stop (like when you’re in line to get pictures of Santa—but don’t worry, the camera phone is probably appropriate enough for a picture like this). Or, sometimes you think it’s working only to find out later that literally every one of your pictures is out of focus, even though it wasn’t that way when you were looking through the lens (like this meal. Or the 600 pictures of my children I took for a potential Christmas card).

My coffee maker and food processor bowl also broke in the last few weeks, adding insult to injury. Nothing like spending a bunch of money at the end of the year when you already have Christmas presents and end-of-year expenses to deal with.

But enough of that. This meal was a bright spot in an otherwise fairly lousy day. I’ve had this on my to-make list for AGES and I’m kicking myself for taking so long to make it. We all loved this, which is not at all surprising. And we totally ate more than the serving (oops). It was such a hit that I texted Courtney to tell her how much we all enjoyed it.

I did make a few changes to the recipe, like reducing the sugar and oil to make this a little healthier. Also, in my typical can’t-properly-read-a-recipe-to-save-my-life way, I forgot to mix the cornstarch with the chicken marinade, but I just ended up dredging the chicken pieces in corn starch before pan-frying them, which worked just fine. Rather than get two pans dirty, I removed the chicken after cooking it, and made the sauce in the same pan, then added the chicken back in to warm through, which worked perfectly.

Steamed broccoli is not my thing so instead we had this with sugar snap peas that I blanched and tossed with just a little toasted sesame oil, sesame seeds, and salt.

Here’s hoping your end-of-year/holiday preparations are going a little more smoothly than mine right now. I will be back (I hope…) with a list of treats I plan on making this year but I am always willing to add more, if you want to share any ideas. 🙂

Adapted from Food & Wine via Cook Like a Champion

Place enough oil on the bottom of a nonstick pan to coat it completely. Add the chicken in a single layer, being careful not to crowd (if your pan is not big enough, you may need to do this in two batches). Cook until chicken is crisp and cooked through,  about 2 minutes per side. Remove the chicken with a slotted spoon and keep warm.

If there is more than 1 tablespoon of oil in the pan, discard it until 1 Tbsp. remains. To the pan, add the ginger, garlic, and white parts of the scallions. Cook for about a minute, until fragrant. Whisk the sauce one more and then add it to the pan. Cook for 3 minutes, or until sauce is thick and glossy. Stir chicken into sauce, tossing just to coat. Serve immediately, topped with the green parts of the sliced onions.