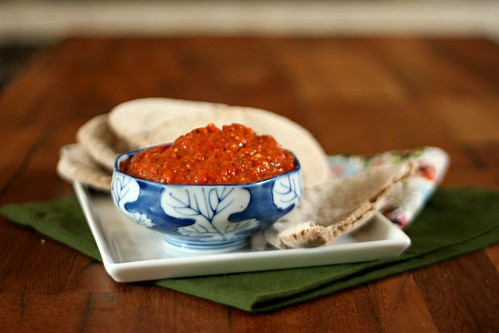 A few years ago, I worked near a sausage and burger restaurant that specialized in European ingredients and toppings. You could get your standard burger (or not—there were several options) and top it with things like tzatziki, a chile-feta spread, and other way-better-than-ketchup toppings. One of my favorite things to top a burger with was ajvar (eye-varr), a Serbian spread made from roasted red peppers, eggplant, and garlic.

I thought about ajvar again recently and added “burgers with ajvar” to my long list of “Things I Would Like to Eventually Make and Blog about” and then, like fate, we visited my family in Michigan, and my Serbian aunt whipped out some ajvar with pita for appetizers. Score! Both my kids ate it up (as did I, of course) so that really pushed me over the edge to make it myself.

I made this on a Sunday and we had it for a snack on pita (my oldest also added feta to his, because he is smart) and then we had it the next day for dinner. I made some cevapi-flavoried patties and we had them on mini pitas as burgers. We all really enjoyed it, and I love what a healthy dip/spread it is. I’m always looking for new and different things to use as appetizers, and this is a good one. I will say, though, that I was a little heavy-handed with the garlic (as always) and while the spread was spot-on on Sunday, by Monday evening, the garlic had become much more noticeable. I would say if you are not going to consume this fairly quickly, err on the lower range of garlic. You can always add more (or, you can roast the garlic for a much mellower, less pungent flavor). By day 3, when we took the leftover burgers to work, I just made sure to have a lot of gum handy. 🙂

I made this smoother than some ajvar dips I’ve seen. Do what you want. 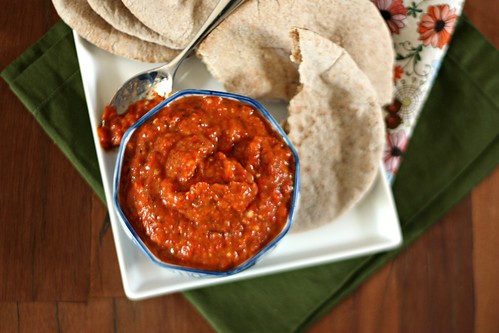 [As an aside, every time I do an “ethnic” recipe on here, I get people coming out of the woodwork to tell me “That dish is not ___(insert ethnicity I claimed it was)____, it’s really ____insert ethnicity of commenter)___! How dare you?!”  Let’s just agree that a lot of places have similar foods, and there is no reason to get your hackles up about this. Comments like that simply won’t be entertained. Well, I will use them for my own entertainment value, but that’s it.]

Arrange the oven racks into the upper half of the oven, and then preheat to 450. Line two baking sheets with foil.

Place the peppers in a large bowl and cover the bowl with plastic wrap or a clean kitchen town. Once cool enough to handle, peel the peppers and place the peeled peppers and their liquid into a food processor. Using a spoon, scrape out the pulp of the eggplant, and place it into the food processor (discarding the skin). To the food processor, add the remaining olive oil, garlic, lemon juice, vinegar, sugar, chili flakes, and salt to taste. Process to your liking – either pulsing for a chunky relish or smoother (as I did).