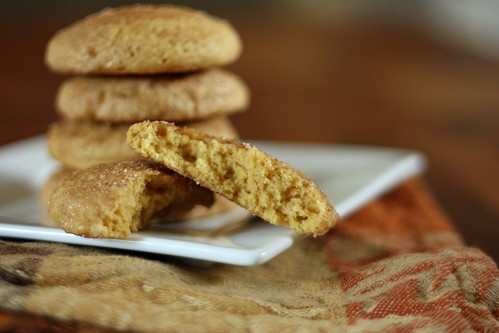 Okay, here it is. The first official pumpkin recipe on the blog this year–and it’s a good one. This doesn’t mean we haven’t eaten pumpkin yet, of course. Zachary and I made some pumpkin-apple muffins on a recent weekend, and then used the leftover pumpkin (as well as some spices and maple syrup) to make a great overnight oatmeal. These cookies, too, are the result of pumpkin leftover from Friday-night-pumpkin-pancake-dinner. PUMPKIN-O-RAMA.

We don’t make a lot of sweets in our house – partly because I’m not hugely into baking and partly because we (or at least I) don’t need that stuff around. That said, I really felt like we needed to use the leftover pumpkin puree for a dessert, instead of another muffin or quickbread. I had a vague recollection of a pumpkin snickerdoodle recipe I’d saved ages ago and voila, here it is!

These are the soft, puffy, cinnamony cookies you’re used to in a snickerdoodle, with the subtle flavor of pumpkin and a boost of warm spices. We all loved them and Z reeeeeeeeeally savors each and every bite.

Speaking of Zachary, if you have a kid who likes to help you in the kitchen, these cookies are really great for that. Zachary had fun helping me measure/mix all the ingredients for the dough (and of course making sure the butter/sugars creamed properly) and then, later, roll the cookies into balls, roll the balls around in the cinnamon-sugar mixture, and finally press down on the cookies with a glass. Plenty of steps that he could do on his own or with a little help. And, of course, later he gets to ask his dad questions like, “Dad, aren’t you going to thank Mom and me for making those delicious pumpkin cookies?” 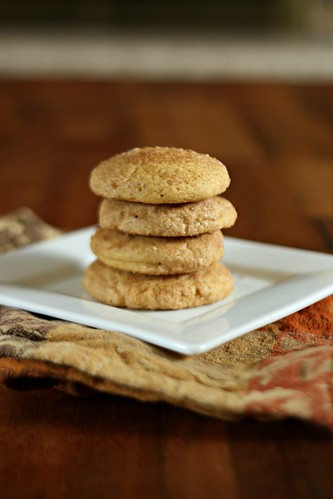 Adapted from Dlynz via Annie’s Eats

Whisk together the flour, baking powder, salt,cinnamon, and nutmeg in a medium bowl. In another bowl or the bowl of a stand mixer, cream the butter with the sugars on medium-high until light and fluffy, about 3 minutes. Beat in the pumpkin puree, followed by the egg and vanilla, just until incorporated. Turn the mixer to low and add the flour in 3 additions, mixing just until combined. Cover and chill the dough for an hour or longer.

Preheat the oven to 350 and line baking sheets with parchment paper or silicone baking sheets. In a small bowl, mix together the ingredients for the coating.

Spoon out approximately 1 tablespoon of dough and roll it into a ball with your hands. Then, roll the ball around in the cinnamon-sugar mixture and place on a lined baking dish. Continue doing this for the remainder of the dough (you may want to keep half the dough refrigerated, so it doesn’t get too soft as you’re working), spacing the cookies about 2-3″ apart on the baking sheet. [If you want to freeze dough, this is a good point to do so.]

Wet the bottom of a glass and then dip it into the cinnamon-sugar mixture. Gently press each cookie down to flatten them slightly (you will need to dip the glass bottom into the sugar a few times).

Bake the cookies for 11-13 minutes or until set and slightly firm to the touch.