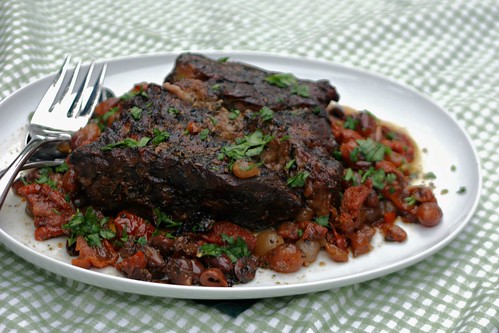 So, yeah. I have a new dentist and we are in that whole getting-to-know-you period. At my last appointment he asked if I had any hobbies, and because I am a really lame person who doesn’t have many any more, I said cooking. I have to say that while I still enjoy cooking for the most part, I would hardly call it a “hobby” at this point so much as a necessity. At any rate, he then started talking about various dishes he likes, and he mentioned that he makes this Italian pot roast from an old Boy Scouts cookbook. He rattled off the ingredients and it sounded really good, so I decided to search for it online (who am I kidding? Internet surfing is obviously my true hobby) and found it rather quickly. I decided to make this in the slow cooker so we could have it during the week, and we had it alongside some Parmesan farro.

I didn’t add any wine to this, but I think next time I’ll add a little red wine, especially since I upped the broth a bit (just to make sure there was enough liquid, since it was going to be in the slow cooker all day). This is not to say that it wasn’t delicious as-is, but I feel like pot roast needs wine or something. 🙂 We did all really like this and the leftovers were SO good too. The sun-dried tomatoes add a great sweetness and the kalamata olives a salty bite. The pearl onions get cooked down until they are soft, sweet, and fabulous. I actually put a whole bag in vs. 1 cup, mostly because I read the recipe incorrectly, but I’m glad I did it.

The prep is also really easy—which should be mandatory for a slow cooker recipe.

Season the roast liberally with salt and pepper. Heat the oil in a large skillet over medium-high, and once hot, brown the roast on all sides. Move to slow cooker.

Add the garlic and stir until fragrant, about a minute. Add in the wine (if using) and broth (if using wine, you may want to reduce beef broth amount slightly), scraping up the browned bits. Stir in the sugar, herbs, and salt and pepper to taste. Pour the mixture over the roast.

Nestly the sundried tomatoes, olives, and pearl onions around the roast. Cook on low for 9-11 hours. Skim off the fat and heat on high, uncovered (if desired) to thicken slightly.