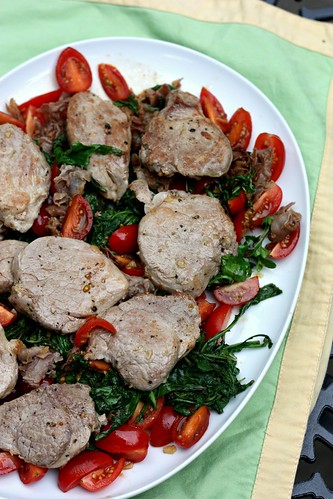 We just got back from a long weekend in New York and we ate everything. ALL THE THINGS. And then we ate some more (and more and more and more). We came back full, achy, and with a rather large credit card bill. Worth it.

But now, well, we have to do a lot of eating at home. And it has to be healthy, too (because even before NYC, being over 30 and having two kids is apparently the worst thing ever for weight loss).  We’ve had this pork dish every summer for the past 3 years but apparently I’ve never managed to post it. It’s incredibly simple, tasty, and healthy. What  more could you ask for?

I’ve made this with tenderloin, as the recipe calls for, and have also made it with thin pork chops/cutlets. Both work just fine (as would regular pork chops), but the tenderloin is the more expensive option of course. I’ve also added chopped rosemary when I’ve had extra, and it works nicely here.

You start by crisping up some salty prosciutto (which we already know I love). The pork is then seasoned simply with salt and pepper and, after cooking it, you quickly wilt some arugula in the same pan alongside balsamic vinegar and tomatoes. A perfect summertime dinner, thanks to delicious tomatoes and a quick meal that won’t heat up the whole  house.

Pork with Arugula, Prosciutto, and Tomatoes

Heat the olive oil in a large skillet over medium heat. Add the proscuitto and cook for about two minutes. Add the garlic and continue to cook until prosciutto is crisp and garlic is golden, about 2 more minutes. Remove with a slotted spoon, leaving as much oil behind as possible. Increase the heat to medium-high.

Season the pork with salt and pepper. Place them in the skillet and cook until well-browned outside and medium inside, about 3 minutes per side. Transfer to a plate and keep warm.

Ad the balsamic vinegar to the skillet, and scrape up any browned bits with a wooden spoon. Cook until nearly all the balsamic has evaporated. Stir in the arugula and cook just until wilted, a couple minutes. Toss in the tomatoes, prosciutto, and garlic. Cook another 2 minutes, stirring occasionally. Season to taste. Place the mixture on a platter and top with the pork medallions.

Pork with Arugula, Prosciutto, and Tomatoes

6 thoughts on “Pork with Arugula, Prosciutto, and Tomatoes”