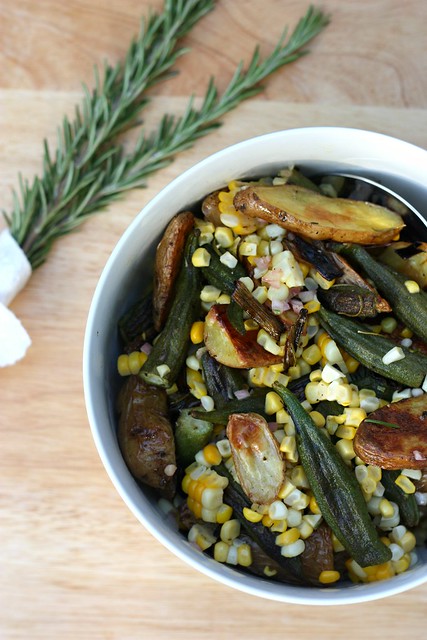 What are your thoughts on okra? Personally, I’ve always loved it. It’s a very popular vegetable in Greek cuisine (bamies, pronounced bahm-yes) and it was another one of those weird things I would eat by the bowlful as a kid, even if it wasn’t a meal time. My husband, on the other hand, not a big fan. Like most people who dislike okra, he’s not crazy about it because of its slimy nature. To be fair, he doesn’t hate it and he WILL eat it if I make it, but it’s certainly not his favorite.

Last year, I made this cornmeal-crusted okra on a few occasions and it turned Tom into a convert. It was also eaten with gusto by Zachary.  When I made this salad, I had another green vegetable on hand for the kids, because I wasn’t sure if they would like it. Sure, the okra doesn’t get as slimy when roasted as it does stewed, but I knew it wouldn’t be quite as crispy and easy to eat as the cornmeal-crusted version. Well, Zachary asked for more okra 4 times. And then the next day when I was having some leftovers, he asked for the rest of that, too. Ian ate it, too. Tom still prefers the cornmeal prep, but did enjoy this salad. So, I guess this was a hit. 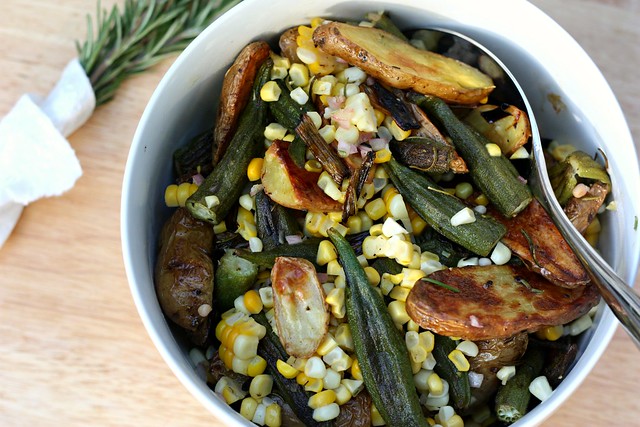 Personally, I’ve never grilled okra, but my guess is you could skewer it and do so, and then grill the potatoes, too, if you wanted to try a different version of this. But, I LOVE roasted potatoes—especially fingerlings—so roasting was a no-brainer for me. We had grilled out the night before, though, and I had Tom set aside some of the corn he grilled for this salad. However, if you can’t/don’t do that, I would roast the corn as well because why bother dirtying another pot and dealing with boiling water?

The original recipe also calls for fava beans, which I don’t doubt would be great in this salad. Buuut I didn’t really notice they were supposed to be in there until 5 minutes before I started making it. I also added entire scallions instead of the white parts, like the recipe called for. Reading comprehension fail. Luckily, to no one’s detriment. 🙂

Place a rack in the middle of the oven and preheat to 450.  Halve the potatoes lengthwise and toss on a baking sheet with scallion pieces, rosemary sprigs, 2 Tbsp. oil, and salt and pepper to taste. Roast, stirring once, for about 10 minutes. Stir the potatoes and add the okra to the pan, tossing to coat. Roast until okra and potatoes are tender, about 20-30 minutes longer.

Place the hot okra and potatoes in a serving bowl, discarding the rosemary springs. Stir in the corn. Add the dressing, stirring to combine. Season with additional salt and pepper if necessary. Allow salad to cool slightly before serving.