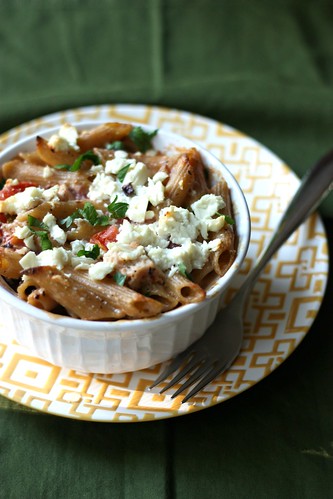 It should be no surprise that I’ve been throwing feta in pasta for pretty much my whole life.  It adds a nice salty bite and tastes delicious, of course. The only “bad” thing about feta is that it’s not exactly known for its melting properties, so it can sometimes be a little more difficult to incorporate it into every bite (which is something you want to do with cheese in general, obviously). But, make a simple cheese sauce with butter, flour, milk, and feta and boom. FETA IN ALL THE THINGS.

This is not your typical macaroni and cheese, so even though the feta is well-incorporated into the dish, it’s not going to be that creamy, silky, overtly cheesy sauce associated with most “macaroni and cheese” recipes. I like to think of this more as a spin on baked ziti or something similar, since it also includes tomatoes. Kalamata olives are adding for that nice briny, salty, Greek flavor (PS if you don’t like olives, try kalamata olives; they blow all olives out of the water). I also added some chicken to this to make it a more filling meal.

Preheat the oven to 400 and grease an 8″ square baking dish. Bring a large pot of water to a boil. Add a large pinch of salt and the pasta. Cook until just under al dente (about 2-3 minutes less than package instructions); drain and return to pot.

Meanwhile, melt the butter in a saucepan over medium heat. Add garlic and cook until fragrant, about 1 minute. Add the flour and cook, whisking constantly, for 1 minute. Slowly whisk in the milk and bring the mixture to a low boil. Reduce heat to medium-low and simmer until thickened, whisking constantly, about 3 minutes. Remove from heat and whisk in 4 oz. of feta. Stir in the tomatoes, olives, oregano, and chicken (if using). Season with salt and pepper and pour over the pasta, tossing to combine.

Pour into the prepared baking dish and top with the remaining feta. Bake until sauce is bubbling and cheese begins to brown, about 25 minutes.

*I seasoned 2 smaller chicken breasts with salt, pepper, and oregano, and cooked them on the stove top in a little olive oil, then sliced to be roughly the same size as the penne.

7 thoughts on “Mediterreanean Macaroni and Cheese”