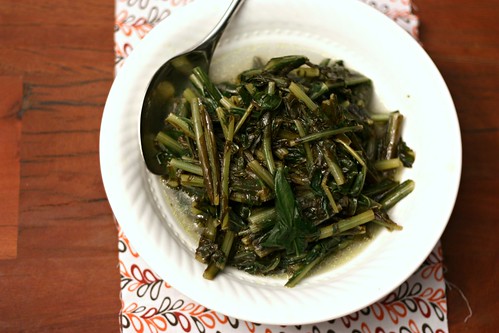 As a kid, I was pretty picky. But, I wasn’t the kind of picky most kids are. It was never difficult to get me to eat vegetables. I would eat Greek-style okra, peas, and green beans by the bowlful—often even cold, straight out of the fridge, for a snack. And xorta would be eaten like we were approaching a crop shortage. But beans, seafood, or Chinese food? Nuh uh. No way.

Xorta (pronouced horr-tah) are just greens. They can be any sort of greens you want, really, but dandelion greens or vlita (amaranth) were the most common for us growing up. All you do is boil them until they are tender, drain them, and toss them with olive oil and lemon. We Greeks are simple – lemons and olive oil in savory foods, honey and nuts in sweet foods. 🙂

Full discloser: Zachary, my garbage disposal, is not a fan of these. This is not surprising because outside of mashed potatoes (WEIRDO), soft leafy greens are the only things he doesn’t really like. He will eat raw spinach or whatever but as soon as it’s sauteed or boiled it becomes untouchable. I would weep at our lack of shared love of leafy greens, but he is otherwise a great eater who does share other loves with me, like listening to REM and Le Tigre in the car.

Bring a large pot of salted water to a boil. Add the greens and boil until they are tender (time will vary based on the greens you choose, but estimate about 15-25 minutes to cook the greens and remove the bitterness).

Drain the greens and add to a bowl along with the lemon juice, olive oil, and salt and pepper to taste. Toss well to combine.

*I prefer them a little more lemony than olive oil-y, but feel free to experiment and just adjust the amounts to your preference.