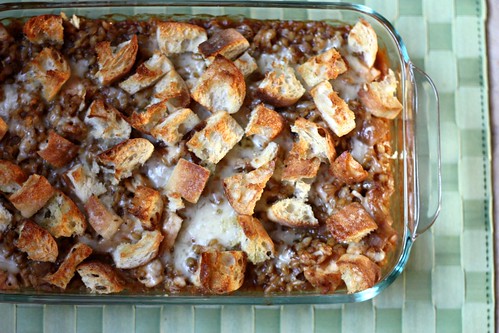 There are some foods I cannot get enough. I will make the dish itself or versions of it often and in any way imaginable. Chicken shawarma is one of them (which I will prove to you in a new post soon) and French onion soup is another. Over the years, I’ve made countless renditions of French onion soup, from a chicken dish, to a grilled cheese, to a rice dish. It should not be surprising that I’d try to sneak gruyere and caramelized onions in as many things as possible. 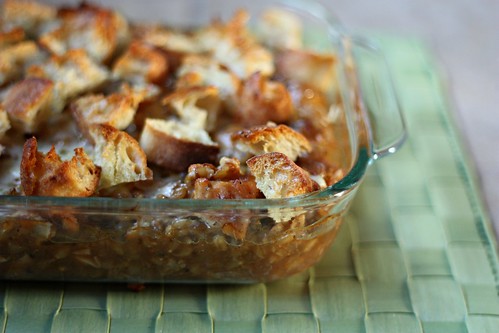 I know that this is not the most spring-y dish. I know that. But I still don’t have a problem making or eating it in the warmer months (at least, now that our air is fixed). Because, again – gruyere and caramelized onions. And bread.  I also know that these pictures are  not great because I got them in the days before it was light at dinnertime. Still, I want to share this with you because I adore it.

I’ve added chicken, which is totally optional, of course, but it does make for a good complete meal. For the grain, I used farro, but you could just as easily use rice, quinoa, barley, or any number of things. I’m just the weirdo who has farro in one of my 3 counter-top canisters (bulgur, not flour or sugar, is in another of course).

Just make sure you take into account the amount of liquid (and time) required to cook your grain. Farro for me is generally a 2:1 ratio of liquid to farro (even though I have seen others that recommend more like 3:1), so that is what I have indicated below (with a little extra to be absorbed by the chicken, and while baking/sitting).  Note also that I have used pearled farro, which has a quicker cooking time. 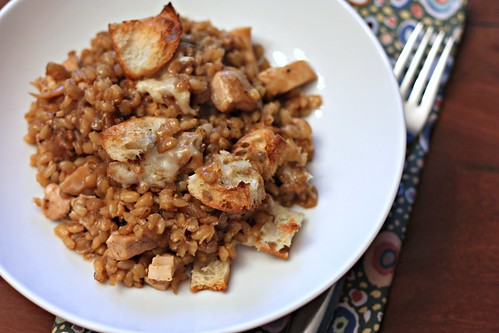 Heat the butter in a medium to large pot/Dutch oven over medium heat (I used a 5 qt. Dutch oven). Add the onions and thyme and cook, stirring frequently. After a few minutes, add a pinch of salt. Continue cooking and stirring until the onions have wilted down and have begun to turn golden brown, about 20-30 minutes.

Add the sherry and continue to cook until it has been absorbed by the onions, and the onions are dark brown in color, about 10 more minutes. Stir in the chicken and beef broth and farro. Bring to a boil and then reduce to a simmer. Cover and simmer until farro is cooked and most of the liquid has been absorbed, about 15 minutes.

Meanwhile, preheat the oven to 375 and spray a baking dish with cooking spray.  Heat the olive oil in a small skillet over medium high heat and add the whole garlic clove. Once fragrant (about 30-60 seconds), add the bread cubes, tossing to coat in the oil.

Into the cooked farro, add the chicken and 3 oz. of the gruyere. Pour the mixture into the prepared baking dish, and top with the remaining 2 oz. of gruyere and bread cubes. Bake, uncovered, until cheese is bubbly and bread is golden, about 15 minutes.

*I cooked 2 whole chicken breasts seasoned with salt and pepper in a little olive oil and then cubed them after they had cooked and rested.