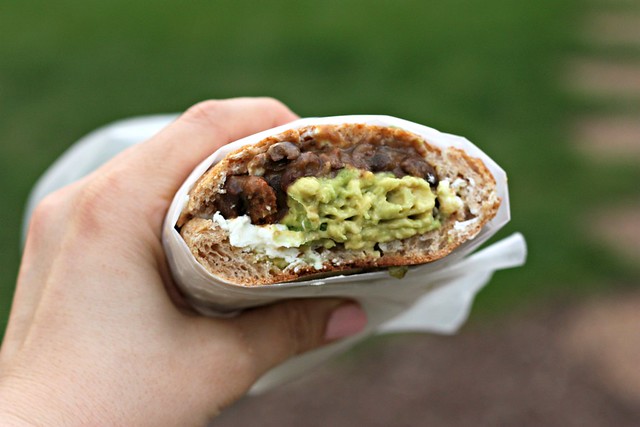 It should come as absolutely no surprise that Zachary is a huge fan of Mexican food, given how much of it we eat (and Ian is already following closely in his footsteps). Last night we were eating tacos and guacamole salad and after he finished his meal in 2.5 seconds, I told him he should open a Mexican restaurant when he gets older, implying that he can own it/cook there. Of course he took it to mean something else entirely and said, “Yeah, so I can eat all the Mexican food!”

So, it should also come as no shock whatsoever that he loves Mexican sandwiches, which combine two of his favorite food groups. And who can blame him? We love them, too.

This time around, we tried a version of chorizo and black bean subs from the always-popular Mexican Everyday. They’re a quick and easy meal using some of my favorite ingredients (chorizo! goat cheese!) and a winner all around. These are more bean-heavy than sausage-heavy so they are also good if you’re trying to cut down a little on your meat intake but not get rid of it all together (though you could certainly make these just with seasoned beans).

I’ve made other versions of tortas before and never blogged them, but one of my favorites is with chicken that has been cooking in tomatillo salsa (crockpot FTW!) with a more-mashed-version of these black beans. Of course, tortas are infinitely adaptable just like tacos, so feel free to experiment (and then tell me your favorite combination, so I can eat more tortas).

Place a large skillet over medium heat. Once hot, add the chorizo, breaking it up, until browned and thoroughly cooked, about 8 minutes. Add about a tablespoon of oil (depending on how much fat the chorizo has rendered) and the  beans with their liquid. Simmer, and then mash with a potato masher or the back of a wooden spoon to a smooth paste (I decided to keep a few bean chunks in there). Season to taste with salt and pepper. Keep warm.

To toast the rolls, you can either use a skillet or the oven/broiler – so preheat the skillet or broiler or heat the oven to 450. Slice open the rolls and scrape out some of the soft insides of the bread with your fingers or a spoon. Brush the rolls with oil and either lay them down in a hot pan to toast up, broil them, or bake them (the pan and oven will take about 3 minutes; broiling will likely only take 1-2).

Spread about 1/2 cup of the chorizo-bean mixture into each crisped roll. Top with cheese, avocado, and salsa.