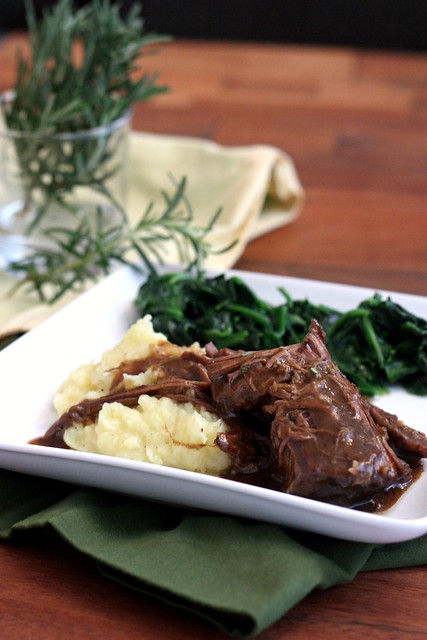 I don’t really care when it “officially” starts. In my mind, it’s winter. I know this because as I was going to work this morning, I looked at my phone and it told me the “feels like” temperature was -12. It should have also told me, “Do not leave your house in this crap.” But it didn’t. Maybe I need a fancier phone.

Weather like this calls for extreme comfort food. For me that involves mashed potatoes (always), pastas, sauces, tender meats, and soups. This  meal includes several of those categories, making it a surefire winner, especially this time of year.

This recipe is  not originally intended for a slow cooker, but since slow cookers excel at taking large cuts of meat and making them fall-apart tender without you actually having to be there, it worked perfectly. I served this over mashed potatoes with a side of sauteed spinach, but you could just throw potatoes and vegetables in with the meat to make it more of one-pot meal. The mashed potatoes were mashed with goat cheese, though, and I have a hard time not finding time for those, you know?

Pat the roast dry with paper towels and sprinkle liberally with salt and pepper. Heat a large skillet over medium-high heat and add 2 tablespoons of oil. Once hot, add the roast and sear on all sides, about 12 minutes. Remove and put in slowcooker.

Add the remaining 1 tablespoon of oil to the skillet (if there is already enough in there, you won’t need it, though), and cook the onions, stirring often, for about 5 minutes. Add the garlic, stirring for about 1 minute. Stir in the red wine and broth, scraping up the brown bits. Add the mushrooms and thyme. Pour the mixture over the roast, and nestle the rosemary sprig in the crockpot. Cook on low for 6-8 hours (longer is fine).

Remove the roast and the woody rosemary sprig (the leaves have most likely all fallen off). Blend the sauce* with an immersion blender until smooth. If you want a thicker sauce, add a cornstarch slurry to the slowcooker, turn to high, and cook for 5 minutes until thickened. Season to taste with salt and pepper. Serve over the roast.

*Note: We were out of dried porcini mushrooms the week I made this, but I had a bag of porcini powder in my pantry, so I used roughly the weight equivalent of that. I didn’t necessarily need to puree the sauce because of that, but I did anyway. I did add a cornstarch slurry at the end, also.