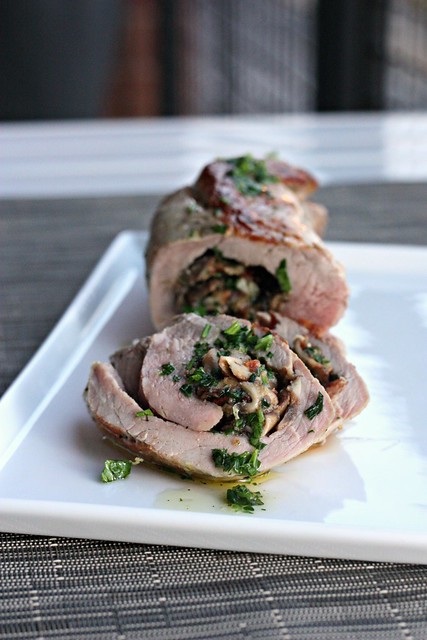 Pork tenderloin is one of my favorite things to cook. It’s easily as versatile as chicken breasts, cooks almost as quickly, but feels a little more special. Plus, one tenderloin is a pretty good size for us right now, although with the way Zachary has been eating lately, he might start needing his own entire tenderloin soon…

Just like pork tenderloin itself, the combination of things you can stuff it with are endless. Well, unless you’re not really eating cheese – then it gets slightly more difficult. But don’t worry, if that’s the case, this tenderloin has got you covered. It’s stuffed with bacon and mushrooms, things that are easily just as good as cheese. Once it’s sliced, it’s served with a parsley-oil that’s very similar to gremolata, which brightens it up and adds a little freshness. The result is a company-worthy main dish that’s really easy to make and doesn’t take much time to cook, either. It shouldn’t surprise you, but we all really liked this dish.

This recipe calls for adding oil to the pan before you cook the bacon (because just what bacon needs is more fat) which you really don’t need to do unless you have leaner, center cut bacon. And we really didn’t need it, because I also served this with duck fat potatoes. At least there were some green beans to balance things out.

If you are using center cut, somewhat leaner bacon, add 2 tsp. olive oil to a skillet to heat (if your bacon will render enough fat, skip the oil). Add the bacon and cook until crisp, about 6-8 minutes. Add the mushrooms and salt and pepper to taste. Stir in the garlic until fragrant, about a minute longer. Remove from the heat and stir in the breadcrumbs and 3 Tbsp. of the parsley. Allow to cool while you prepare the pork.

Butterfly the pork by cutting it almost in half lengthwise (not all the way through). Cover with plastic wrap and pound with the flat side of a meat mallet until about 1/2″ thick. Spread the mushroom mixture over the pork tenderloin, leaving a border at the top and bottom, and starting with the long side, tightly roll up the pork tenderloin. Secure the seam with toothpicks or kitchen twine. Brush or rub the outside of the pork tenderloin with olive oil and season with salt and pepper.

Get an oven-proof skillet (I recommend cast iron) hot on a burner. Add the pork and brown on all sides, about 10 minutes total. Place the pan in the heated oven and cook until pork registers 140º, about 15 minutes. Rest for 5-10 minutes before removing the toothpicks/twine and slicing.

Meanwhile, mix the remaining 1.5 Tbsp. olive oil, 1 Tbsp. parsley, lemon zest, and salt and pepper to taste together. Drizzle the mixture over the sliced pork tenderloin and serve.