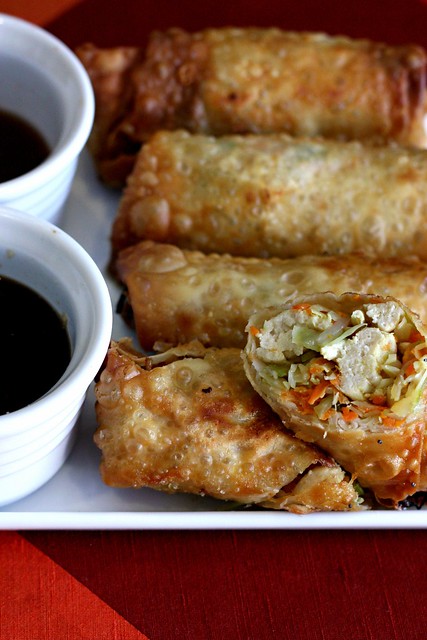 Egg rolls are sort of a magical thing. They take things that aren’t terribly exciting on their own, like shredded vegetables, and make them fabulous. Thanks, in large part, to some hot oil. 🙂 I’m a big egg roll fan. One of our favorite Chinese delivery places comes with free egg rolls if you spend a certain amount, which we do, and I always get them – even though Tom is not the biggest egg roll fan. He’d prefer the crab rangoon instead—but since I always have to do the ordering, I win.

I never really considered making egg rolls at home, at least not a fried version, because I actually really hate frying things (well, and rolling things with filling, too). I have a couple of really unattractive grease scars on my arms that prove how much I hate frying things, in fact. When I made these, I baked half of them and then froze the rest. The baked versions are delicious (and safer, if  you’re a clutz like me), so don’t be hesitant if you’re trying to cut some calories. But, of course, the fried counterparts of baked items trump them about 99% of the time, so on Super Bowl Sunday, the other half of the batch got fried. And without injury, I’d like to add.

I had ground chicken in the fridge, so I just decided to use that rather than breasts. I didn’t marinate it, instead just adding the ingredients from the marinade as I was cooking the chicken/vegetables. I also added some ginger and used a coleslaw mix for the most of the veggies, out of laziness (and less potential waste). These are delicious, and also freeze well (I took them out of the freezer and placed them in the fridge earlier in the day, to thaw a little).  Definitely give them a try on one of your take out-fake out nights!

Heat 1 Tbsp. oil in wok or large pan over high heat for 2 minutes. Add chicken to the wok; cook about 2-3 minutes, breaking up as  you cook, before adding 1 Tbsp. of the soy sauce and the scallion whites. Continue to cook until chicken is browned and nearly cooked through, about 2-3 more minutes. Remove chicken to a plate and set aside to cool.

To the same pan, add the remaining 1 Tbsp. of vegetable oil. Stir in the coleslaw mix, garlic, ginger, and remaining Tbsp. of soy sauce. Use tongs to “toss” the vegetables. Cook, over high heat, for about 2 minutes or, until cabbage begins to wilt. Toss in the bean sprouts and scallion greens, and cook for about 1 minute more. Remove from the heat.

Combine the chicken and vegetables, mixing well. Place a colander in your sink, or over a large bowl. Add the egg roll mixture to the colander. Using several layers of paper towels, press down firmly on the egg roll filling, pressing out as much moisture as possible. Repeat process several times. Let filling cool before rolling into wrappers.

If frying, heat 3 inches of vegetable oil in a dutch oven until the temp registers 375º. If baking, preheat the oven to 425.  Wrap the rolls according to the package directions, dipping your finger in the cornstarch/water mixture and then using it to seal the roll .  Place into oil 4 or 5 at a time, turning over occasionally, until golden brown, usually about 4-5 minutes. Remove from oil with tongs, and place vertically into a large pot or casserole dish that has been lined with paper towels, to drain the grease from the rolls without making them soggy. If baking, place the rolls on a baking sheet (or a rack on top of a backing sheet), spray with cooking oil. Bake until golden brown, about 15 minutes.