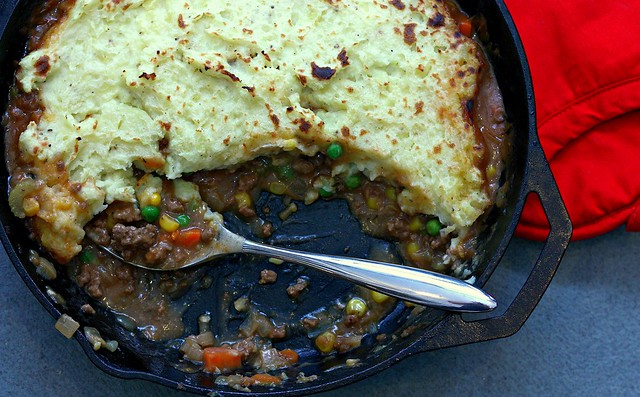 Our “mild” winter took a turn recently to subzero temps that have me wondering, once again, why I live in the Midwest. And yes, I know, it’s winter in Chicago so I shouldn’t expect mild temperatures to begin with, but the teasing is so not cool. Also not cool? A windchill temp of -19.

The cold winter blues definitely call for some warm comfort food. Shepherd’s pie is one of the most comforting dishes to me. I don’t make it often (though I’ve managed to Greek-ify it in the past), but when I eat it, I’m always reminded of how much I love it. First of all, mashed potatoes are one of my favorite comfort foods of all time. I don’t even need a main dish to make me happy when mashed potatoes are in the picture. Secondly, the meat and vegetables all simmer together in  a really fragrant and hearty sauce. This makes it not only delicious, but also a one-pot meal. Score! We did have salads with this, just for something crisp and fresh – but since there are vegetables in the filling it’s not really a necessity. This is also a healthier version of this classic dish. Truth be told, there doesn’t seem to be much of a difference in the filling, which is fairly healthy to begin with (assuming you’re using a lean meat) but the potatoes aren’t butter and heavy-cream laden, and still manage to taste pretty damn good.

In addition to being a meal in itself, this is mostly made in one skillet. Sure, you need a separate pot to cook the potatoes but ultimately, you’re not doing a ton of dishes or spending a lot of time on this. It takes a little while to cook (close to an hour) but most of that is inactive cooking time, and since you really only have that potato pot to wash in the meantime, you can do other fun stuff, like read Curious George Goes to the Library approximately one billion times to your toddler.

Adjust an oven rack to the upper-middle position and heat the oven to 375º.

To make the filling: Heat the oil in a large oven- and broiler-proof skillet (I used a 12″ cast iron pan) over medium heat until shimmering. Add the carrots, onion, and celery and cook  until the vegetables are softened, about 6-8 minutes. Stir in the ground beef, breaking it up as you cook, until browned (about 5 minutes). Add the garlic and tomato paste, stirring until fragrant, about 30 seconds. Add the flour and cook for 1 minute. Gradually whisk in the broth, beer, Worcestershire, and thyme.

Bring the mixture to a simmer over medium-low heat and cook, stirring occasionally, until thickened but still saucy, 20-25 minutes. Off the heat, stir in the peas and corn. Season to taste with salt and pepper.

To make the topping: Meanwhile, bring 2 qts. water and the potatoes to a boil over high heat. Reduce the heat to medium-low and cook until the potatoes are tender, about 15 minutes. Drain the potatoes and return to the saucepan. Mash the potatoes with the butter and milk, and then the sour cream until smooth. (Note: I like to melt the butter and heat the milk in a measuring cup, in the microwave. Easy to do, just uses 1 cup, and easy to pour into the potatoes.) Season to taste with salt and pepper.

Dollop the potatoes over the top of the filling, and then smooth into an even layer, making sure to spread to the edges of the skillet. Bake until the filling is bubbling, about 15 minutes. Heat the broiler and then broil the casserole until the top is golden brown, about 3 minutes. Cool on a wire rack for 10 minutes before serving.

*We used a mild, sort of fruity lager which worked well. ATK actually recommends a nonalcoholic beer, for its sweetness and discourages the use of stouts/strong beers, which may overpower the dish and make the filling taste bitter.