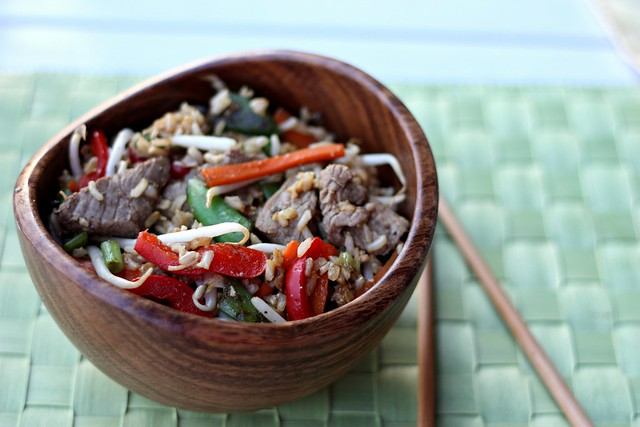 When I started college, my friends and I quickly found a local Chinese and Japanese restaurant that, in conjunction with beer, was probably the source of the Freshman 15 for a lot of people. I almost always ordered the chicken fried rice and what I loved about it was that, unlike “traditional” fried rice which often just had peas and carrots, this one was also loaded with snap peas and mushrooms.

I don’t order fried rice at Chinese restaurants nearly as often as I used to, just because I’ve found so many other dishes I enjoy, but I do make healthier versions of fried rice at home. I tend to use lean proteins like shrimp, chicken, or pork tenderloin, and I always stick to brown rice. This recipe caught my eye, not only because it uses beef—which I admit I’ve never done—but also because it uses oyster sauce, a flavor I love. I also really liked the addition of the bean sprouts with all the other veggies.

Stir fries and fried rice dishes don’t take very long to cook, but sometimes chopping all the ingredients can take some time. To help myself out, I cut the meat and vegetables in the morning, so those were ready to go. Everything moves pretty quickly so even if you don’t cut everything ahead of time, you will still want to make sure you do all  your chopping in the beginning. I’m usually a prep-as-other-things-cook kinda gal, but it doesn’t really work here.

This was a quick weeknight meal that was tasty,  nutritious, and filling. Plus, I already knew that Zachary loved sugar snap peas (he thinks the fact that there are tiny peas in the pod is both awesome and hilarious) but now I know that he’s also a pretty big bean sprout fan, too! The red peppers, though, forget it. 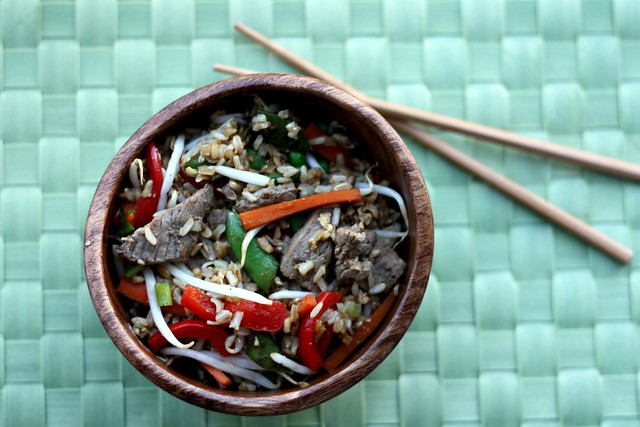 For the sauce: Whisk all the ingredients together in a small bowl.

For the beef and vegetables: Combine the white parts of the scallions, garlic, ginger, and toasted sesame oil in a bowl.

Heat 1 tsp.  canola oil in a large nonstick skillet over high heat until just smoking. Lightly season the beef with salt and pepper and add to the skillet; and cook until lightly browned on all sides but not fully cooked, about 2 minutes. Transfer to a bowl and set aside.

Add the remaining 1 tsp. canola oil to the skillet and return to high heat. Stir in the snap peas, and then add the water. Cover and steam until the snap peas are bright green and begin to soften, about 2 minutes. Uncover and allow the water to evaporate, about 30 seconds.

Stir in the carrots and bell pepper and cook until crisp-tender, about 3-4 minutes. Clear the center of the skillet and add the garlic mixture. Cook, mashing the mixture into the pan, until fragrant, 30 seconds. Stir into the vegetables.

Clear the center of the skillet again and add the eggs. Cook, stirring constantly, until the eggs are cooked but still moist, about 20 seconds.

Return the beef with any accumulated juices to the skillet. Stir in the rice, peas, and sauce. Stir constantly until the rice is hot, about 2 minutes. Turn off the heat and add the bean sprouts and green parts of the scallions.

*I didn’t actually measure my cooked rice, but for 4 servings (which is what this recipe makes) I tend to make 1 cup of dry rice, which is what I did here, too. I cooked the rice the night before.