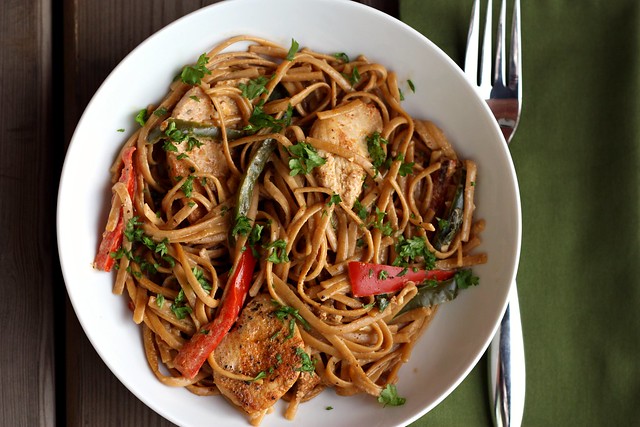 This is one of the first meals I ever made for Tom. I believe it was number two or three, actually. The first was this incredibly fatty creamy chicken pasta dish, which we obviously loved because it had about 4000 calories per serving. The other was soutzoukakia. I actually went to Tom’s apartment while he was at work and made them so they’d be ready when he got home. I was so excited, and at the first taste I realized the meatballs were woefully undersalted. Sigh.

This dish I managed to successfully make the first time around, and while we loved it, it didn’t get made again more than once or twice. I’m sure a large part of the reason is that I started getting a lot more health conscious and ditching most things that had a lot of cream (which included the aforementioned creamy chicken pasta dish).

I recently saw the very recipe I’d first made for Tom on Prevention RD. Like me, Nicole tends to healthify recipes. So, of course, I instantly put a more calorie-appropriate version of this dish on the menu for the following week. The next day, I saw someone pin a similar recipe on Pinterest by The Pioneer Woman and I liked that she used some chicken broth in her dish, which further cut the amount of half and half I’d have to use in mine (I, too, was shocked about the lack of additional cream on her end).

I completely forgot to add the mushrooms to this (which is why I had extra for those chicken sausage subs) but I’m including them in the list below because I know for a fact they’re great in this dish. And every dish, for that matter.

This meal serves 4 pretty heartily and, at that size, clocks in at about 450 calories per serving, which is not bad for a one-dish meal, particularly one with a cream sauce. If you stretch it to 5 servings, you are allowed 2 cookies for dessert instead of 1, obviously.

Inspired by Allrecipes and The Pioneer Woman