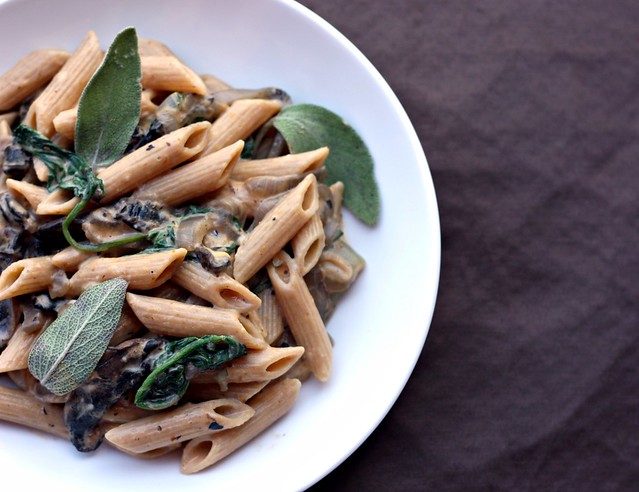 I love pumpkin desserts and drinks, but I’ve always shied away from savory pumpkin dishes. I tried pumpkin soup once and it basically tasted like a hot, liquid version of ice cream and…well, that’s not good. My  husband loves it, of course, but he also loves candied sweet potatoes, which are definitely not my thing, either.

I had leftover pumpkin puree, but didn’t want to make dessert. Since I’d already made a quickbread and pancakes, those were out. I was admittedly hesitant about taking on a savory pumpkin dish, but it seemed like the only other option. I decided to look for one that wasn’t overly sweet and spicy (spicy as in cinnamon and clove-y) and came across this one.

This recipe seemed like a winner because the sauce looked thick and indulgent. It called for nutmeg, but I love nutmeg in creamy sauces, so this made sense to me. The same goes for sage. And, as you know, I can never turn anything with mushrooms down. Plus, the pumpkin amount seemed minimal, so it felt like a good transition into savory pumpkin dishes for me. The original recipe calls for gorgonzola but, try as I might, I just cannot get behind blue cheeses.  I substituted Pecorino Romano, which I love for its sharp and salty bite. I also added arugula, which gave it a slight peppery bite (since I cooked it first, the peppery flavor was drastically reduced).

We all really enjoyed this dish. It’s creamy and indulgent without the guilt, and even though it’s a vegetarian dish, the use of meaty mushrooms and whole wheat pasta made it plenty filling.

Zachary inhaled this. He ate it more quickly and with more gusto than I have seen him eat a meal in recent history. You’d think I had set a plate of cookies down in front of him. He was not disappointed when we had leftovers the next day, either.

I’m submitting this post to Presto Pasta Nights (which I haven’t done in way too long!). It’s hosted this week by Tandy of Lavender & Lime.

Bring a large pot of water to boil and add the pasta. Cook until al dente.

Meanwhile, make the rest of the dish. Heat the oil in a Dutch oven over medium-high heat until shimmering. Add the mushrooms, onion, and garlic. Cover and cook 3 minutes. Uncover and stir in the arugula. Cook for an additional 5 minutes or until vegetables are tender and arugula has wilted, stirring occasionally.

Combine milk and sage in medium saucepan over medium heat; bring to a simmer. Whisk together the cornstarch and water and add to the milk mixture, stirring with a whisk. Cook 2 minutes or until thick and smooth, stirring constantly. Whisk in the pumpkin. Remove from heat and add salt, pepper, nutmeg, and cheese.

27 thoughts on “Pumpkin Penne with Arugula, Mushrooms and Romano”