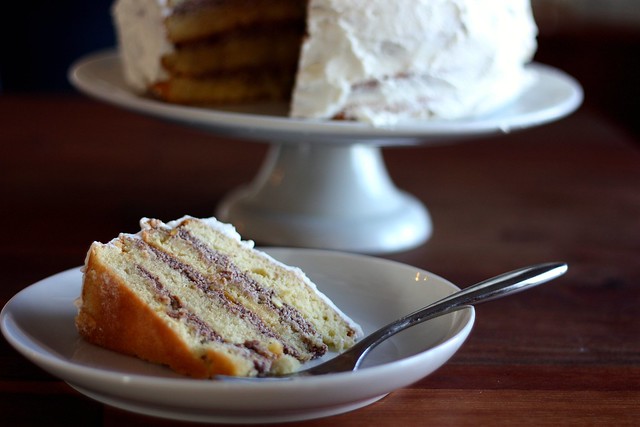 I have two favorite cakes.  One is simple and traditional: yellow cake with chocolate frosting. You really can’t go wrong with that classic combination.  My other favorite cake is less common and more involved: cassata cake.

I love cassata cake. And I mean LOVE.  Cassata is an Italian sponge cake that has the same type of filling you’d expect to find in a cannoli, which is one of my favorite desserts of all time.  (Sidebar: Chicagoans, where do you buy your favorite cannoli?)  I often requested cassata cakes for my birthday growing up (what can I say? I was a fancy kid.) and had one at my bridal shower, too.  But, as much as I love it, I’ve never attempted to make one on my own.  I have a bit of a fear when it comes to layer cakes in general, so I’ve only made them a couple times.

I saw this recipe on the lovely Helene’s site, Tartelette, and bookmarked it long ago.  The original recipe calls for orange zest, which Helene omitted but I included (although less than the original recipe calls for) and a glaze with a little almond extract.  I decided to use Helene’s stabilized whipped cream frosting (adding a splash of almond extract) because I think it suits cassata better and unlike the glaze—which had a raw egg white in it—could sit in my fridge a little longer.

Of course, with how delicious this cake is, I’m surprised it made it more than a day, anyway.   Everything about this cake was pretty amazing (well, except for the person decorating it.  Man does she suck.). The sponge cakes were great, the rum syrup was perfect for imparting a bit of rum flavor without being overwhelming and also in keeping the cakes moist, and the filling was delicious and not overly sweet. 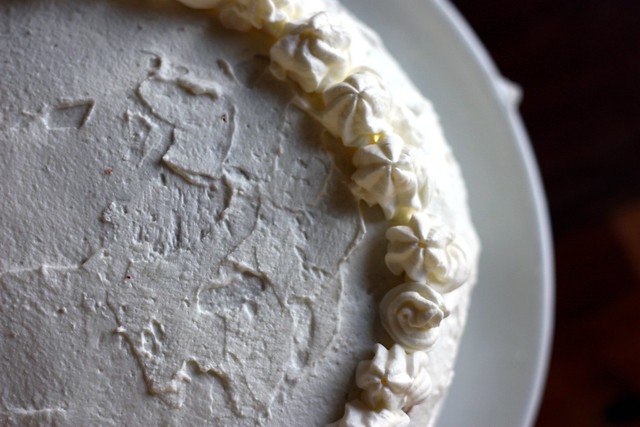 This cake was pretty involved and time-consuming, but not difficult.  Keep in mind that the assembled cake needs to cool in the fridge for 4 hours before you can frost it, and then needs to set up in the fridge again once it’s frosted, so this isn’t a cake you’ll want to make a few hours before having guests over for dinner.  The only other time I’ve made a sponge cake was for a Boston Creme Pie.  The approach for this cake was a bit different and after I added the dry ingredients to the beaten egg yolk mixture, I was a bit worried because it was pretty thick and firm.  It made folding in the whipped egg whites a little more difficult, but ultimately it all came together.  I did find the recipe for the rum syrup to make a bit  too much.  I think  halving it would be too little, however, so you may want to scale it to about 2/3 of the recipe. Also, I used the convection setting on my oven and my cakes baked up in about 27 minutes, so definitely keep an eye on them earlier than the 35-40 minute mark called for in the recipe, even if you aren’t using convection. 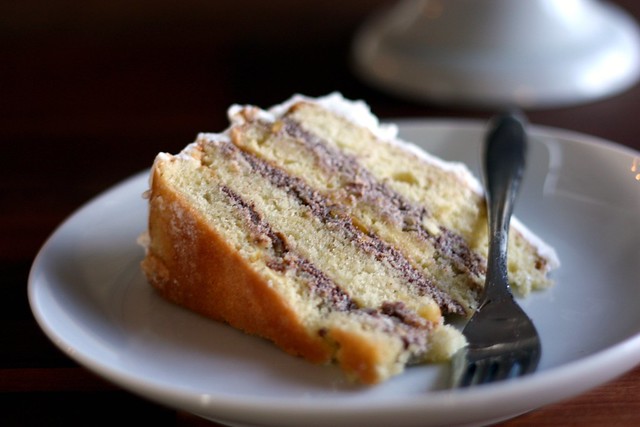 Cake and filling adapted from Tartelette