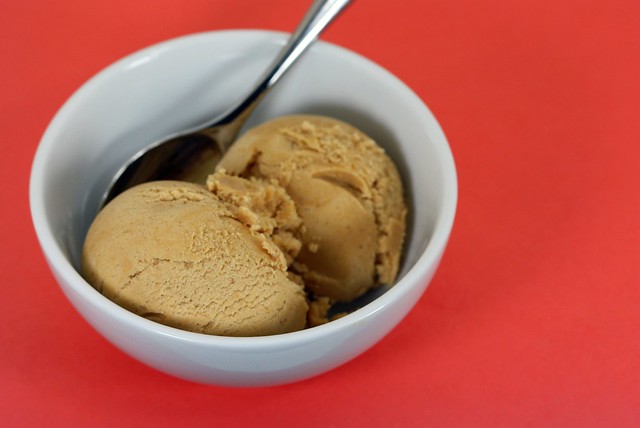 I actually made this ice cream a while back but completely forgot to blog it.  Even though I made it at the height of pumpkin mania, I don’t think we should stop eating pumpkin as soon as winter sets in.  It should be a year-round treat!

This ice cream is delicious.  It’s nice and creamy and spicy.  It uses a bit less heavy cream than other ice cream recipes I’ve made and it has pumpkin (a superfood!) in it, so it must be healthy right? Errr…yeah, let’s go with that.

The only change I made to this recipe was to add cloves, which I deem a necessary ingredient when dealing with pumpkin.  I really loved the fresh ginger in this ice cream.  I think some maple glazed pecans would be a fabulous addition but I ran out of time when I was making this, so I’ll be sure to add them the next time around.

You’ll notice Dave’s is a little more scoopable looking than mine and that is no doubt because he added a little liquor to his ice cream.  Feel free to do this, but I completely forgot.  I didn’t have a problem scooping it out.  In fact, I may have scooped a little too fast.  And a little too much…

Adapted from The Craft of Baking and David Lebovitz

Make an ice bath by putting some ice and a little water in a large bowl and nest a smaller metal bowl (one that will hold at least 2 quarts) inside it. Set a mesh strainer over the top.

In a medium saucepan, add the milk, cream, granulated sugar, ginger, ground cinnamon, cinnamon stick, cloves, nutmeg, and salt.  Heat the mixture until hot and the edges begin to bubble and foam.

Whisk the egg yolks in a separate bowl.  Gradually whisk in about half of the warm spiced milk mixture, stirring constantly.

Scrape the warmed yolks back in to the saucepan and cook over low heat, stirring constantly and scraping the bottom with a heatproof spatula, until the mixture thickens and coats the spatula.  (If using an instant-read thermometer, it should read between 160º-170ºF.)

Immediately pour the mixture through the strainer into the bowl nested in the ice bath. Mix in the brown sugar, then stir until cool.  Chill thoroughly, preferably overnight.

Whisk in the vanilla, liquor (if using), and pumpkin puree. Press the mixture through a fine-mesh strainer, then freeze in your ice cream maker according to the manufacturer’s instructions.