I have a recipe problem.  You see, I rarely cook from a recipe and yet I have approximately 23 million recipes saved to try.  I don’t really believe in new year’s resolutions but I must say that this year, I am really going to make an active effort to try some of the things I have had bookmarked for months. Years, maybe.

My internet favorites? Whoa. I would venture to say 95% of my saved sites are recipes (and are completely unorganized, of course). Add in there the fact that I have 2 home computers and one work computer and you are looking at a borderline-crazy addiction. Did I mention Google Reader? Because I have about 300 recipes saved there, too.

And I don’t limit my addiction to the space-saving Internet. Oh, no. I have cookbooks that take up space, and magazines, too.  I even started a project a couple weeks ago. I  have all these old cooking magazines sitting around taking up space. Here’s a sample. I decided to go through these magazines one by one and rip out every recipe that sounds good, and then recycle the magazines. Eventually I plan on bookmarking the recipes online rather than keeping the clippings, but for now this removes some of the clutter and will refresh my mind about things I want to make. Even if I don’t try these recipes, they often act as inspiration.

This recipe has been saved since the beginning of soup-making season – LAST year.  In fact, it sounded so good when I saw it that I told myself I would be making it pretty much immediately. OK, so my promise finally came to fruition well over a year later.

And it kinda sucks I waited, too, because this is a good soup. Have I told you how much I love chesnuts? Oh, man. I am such a happy camper sitting around peeling and eating roasted chestnuts. I love mushrooms, too. This soup is such a nice combo of those earthy, delicious flavors.  But *of course* I had to add some bacon.  This would be a delicious vegetarian soup if you omit the bacon and use vegetable stock. It’s so creamy and rich and yet, it has no cream in it. 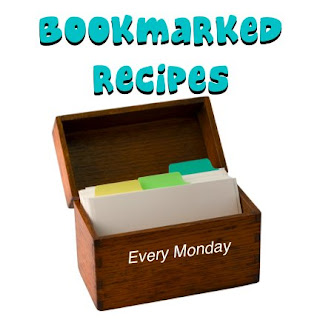 I am submitting this post (hopefully the first of many to come this year!) to Ruth, who hosts Bookmarked Recipes weekly. Combine dried mushrooms and water and let stand about 15 minutes, until mushrooms are soft.

Add bacon to medium heat and cook. Remove with a slotted spoon and set aside.  If there’s  more than 1/2 Tbsp or so of bacon grease, pour the excess off, and then add in the butter. To the pot, add the parsnip, carrot, celery, shallots and garlic. Saute until tender, then deglaze with the sherry and reduce slightly. Add the bouquet garni and the broth.

Transfer the porcinis to the pot, and also pour in the soaking liquid being sure  not to pour in any of the sediment that has settled at the bottom. Add chestnuts and salt and pepper to taste. Bring to a boil, cover, and simmer for 20 minutes, stirring occasionally. Remove the herbs and puree the soup in a blender or with an immersion blender. Garnish with bacon and, if desired, parsley and sour cream.

Chestnut Soup and My Recipe Addiction

30 thoughts on “Chestnut Soup and My Recipe Addiction”