During the holidays, I read Ruth Reichl’s Tender at the Bone: Growing Up at the Table. Reichl, now the editor of Gourmet magazine, used to be the food critic for the New York Times. This book is about some of her earlier adventures in life, food and otherwise. I really enjoyed the book, though I think I preferred Garlic and Sapphires: The Secret Life of a Critic in Disguise, which focused on her time as the NYT critic. At any rate, one of the great things about Reichl’s books is that they are sprinkled with recipes throughout. When I saw the recipe for a pork and tomatillo stew based on the version at a restaurant where Reichl used to waitress (The Swallow), I bookmarked it to try soon.

I made the stew tonight, with a few changes since I can never follow a recipe, and it turned out well. It was a little too liquidy for my tastes and the orange flavor just a tad too strong. I would probably reduce the OJ by a couple ounces next time around. It wasn’t overly orange-y, I would have just preferred it to be slightly less sweet. I did think it might be too much at the beginning but I figured the beer and tomatillos would mellow it out–and it did quite a bit. Don’t get me wrong…it doesn’t taste like it has 12 oz of orange juice in it 🙂

Unfortunately, I don’t like cilantro. I have tried and tried and tried but it just tastes like potpourri to me. It’s one of those things I really wish I loved. In my experience, you either love cilantro or you loathe it.  If necessary, I can tolerate it in small amounts, but I’d rather not So, although they don’t really have similar flavors, I used parsley in this recipe instead because it’s more palatable for me.

Note: recipe has been slightly updated since posted. 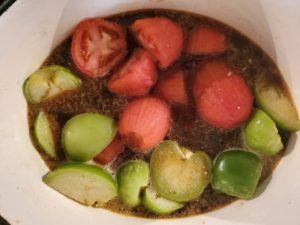 The Swallow’s Pork and Tomatillo Stew
adapted from Ruth Reichl

*To peel tomatoes, cut a shallow X into the bottom of each tomato. Boil them for about 30-45 seconds. Lift out and immediately place into a bowl of ice water. When cool enough to handle, peel the skins off.

In a saucepan, add the beer, orange juice, tomatoes and tomatillos. Bring to a boil and then reduce heat, simmering until the tomatoes are soft. Set aside.

Meanwhile, heat the canola oil in a dutch oven or stockpot. Add the garlic cloves and stir to coat with the oil. Sprinkle the pork with salt and pepper and then add it to the oil, in batches, to brown on all sides. Remove from the dutch oven. Add the onion and jalapeno and saute until tender, 5 or 6 minutes.

Add the tomatillo mixture to the dutch oven, scraping the bottom of the pot to be sure you are getting all the browned bits. Add the pork, cilantro, cumin, salt and pepper. Bring the mixture to a boil and then reduce the heat to low. Cook, partially covered, for about 2 hours.

For the topping, stir the lime juice into the sour cream.

Serve the stew over rice, and top it with the sour cream.