Peabody of Culinary Concoctions by Peabody fame has recently moved into what is probably one of the cutest houses I’ve seen. She has asked people to bring a dish to her virtual housewarming party, and I’ve been trying to figure out for a few days now what to bring. Since a lot of Peabody’s blogging friends are bakers, I figure many of the dishes brought will be desserts, so I decided to “bring” something savory. The decision was made much easier by the fact that baking is not what you would call my strong suit. In fact, you’d probably call it my weakness. So, no need to try and compete with all those wonderful bakers!

I ended up picking avgolemono (egg-lemon rice) soup, not only because I love making soups and it’s Greek, but because Seattle has had its first snowfall, and I figure something warm and comforting is good. I am serving the soup in mugs so it’s easier to eat at a potluck, and it’s even served on a special trivet, just for Peabody…a hockey puck. I considered using my Lidstrom jersey under the mug, but I don’t think self-proclaimed Red Wings hater Peabody would like that much. Or, maybe she would, in hopes that the soup would spill all over the jersey 😉

Avgolemono is probably the easiest soup in the world to make; not that it tastes that way. The thing is, because it has so few ingredients (4, if you’re not adding chicken), you really want to use homemade stock for this soup to make sure it has a great depth of flavor. It’s not that you  can’t use a good quality store bought stock, but I’m going to be a little Ina Garten here and give a strong recommendation for homemade. 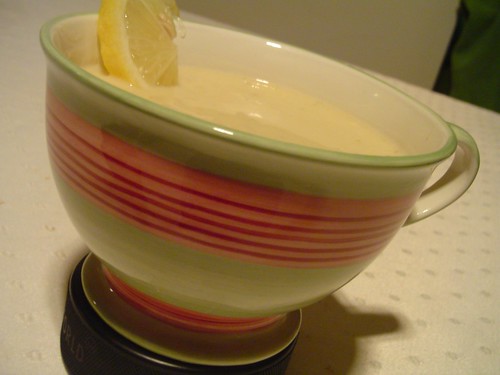